Not far from Chiang Mai, in northern Thailand, lies one of the holiest temples in the entire kingdom. The temple of Doi Suthep sits near the top of the mountain of the same name, and can be seen glistening in the sun from miles away. The full and accurate name for the temple is Wat Phra That Doi Suthep.
Like many temples in Thailand, this one is steeped in history. And depending on your level of belief in religious legends, much of it is a little hard to believe. Legend has it that the temple was founded in the late 1300’s by the local king, who was led there by a sacred white elephant. That elephant carried a fragment of the collarbone of Buddha, and when it reached the mountaintop, the animal died. This was taken as an omen by the king, and the temple was established.

Interestingly, monks get to wear shoes in the temple!

Once you’re at the base of the temple, you have the choice of walking up the 309 steps from the street, or taking the funicular car up the mountainside. I’ve always walked up the stairs, because I think it’s a beautiful walk, and devoted Buddhists think of it as ‘making merit’ when the put in the effort. At the top of the stairs, it’s shoes off before you can enter the holy area, and where all the gold is.

Giant wooden carvings that must have taken years to make

Inside the temple, it’s very beautiful, and very gold. There is a large chedi in the middle of the compound, and Buddhists will circumambulate the large golden structure. When it’s sunny, the bright gold covering of the chedi is a bit much to take. Bring sunglasses. At one side of the temple, there is an observation deck where you can see the city of Chiang Mai sprawling out in the distance.

Photo Tips when visiting the temple

← Prev: Bo Sang Umbrellas Next: The Historic City of Ayutthaya → 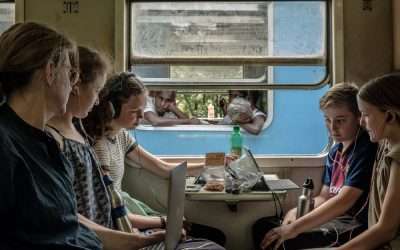